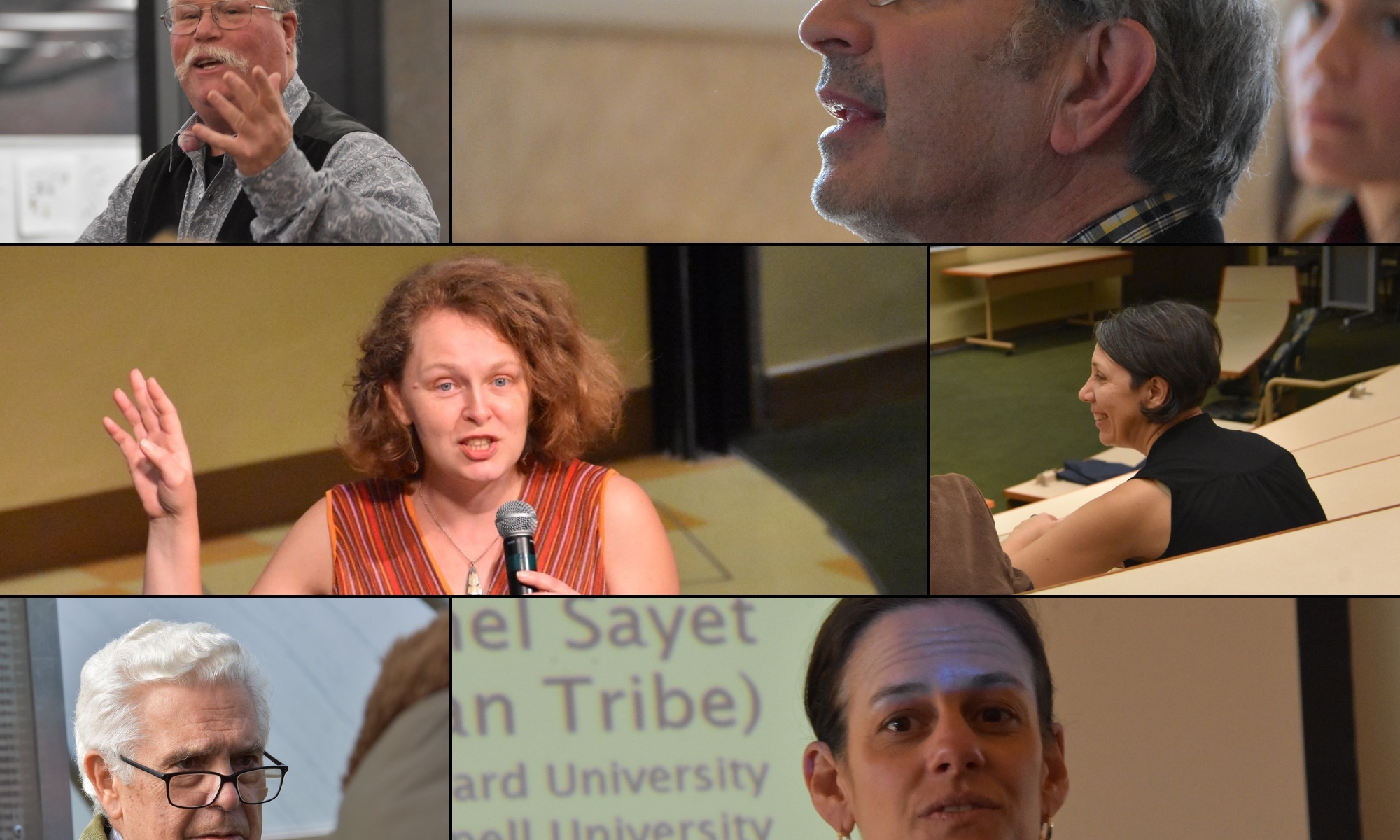 Each year, our COE Think Tank brings together Wes students and faculty from across the university, plus a noted outside scholar, for a yearlong conversation on a topic of vital environmental importance. This year’s focus: how humans relate to and value the non-human part of the world. Learn more about the questions our 2018-19 Think Tank faculty fellows have been pondering this academic year.

I am writing a book that aims to motivate environmentalism through our visceral fear of infections: Plagued by Our Success—How Human Domination of the Planet is Making Us Sick. Our fear of infections is ancient, and our tendency to avoid infections is shared across non-human animal species, and I believe this fear can motivate an environmentalism that simultaneously improves the health of humans and the environment. I am showing how many of our essential demands on the environment are impacting wild creatures in such a way that we are likely to pick up novel infections from other species. That is, when we hunt wild creatures, engage in agriculture, transport animals, consume energy, or cure our infections, we increase our vulnerability to infections. My suggestion for incorporating infectious disease into an environmental ethic stems from a public health ethic from the turn of the 20th century. This was known as “the socialism of the microbe”—that we must care for others’ infections lest they become our own. For the last century, this ethic motivated investment in secure public water supplies, government agencies dedicated to public health, vaccination programs, and medical research. I am aiming to update microbial socialism for the 21st century. The idea is that our investment in health must go beyond medical care of the sick and preventing infections through medical means; we must also invest in the environment, both here and abroad, to minimize the risk of infections.

The overall title for my work is “The importance of the aquatic freshwater biodiversity in the maintenance and welfare of human local and regional human populations.”This work will have two main components. I list each separately below.

Adaptive Conservation and Management of the Aquatic Biodiversity of the Orinoco River Basin, Venezuela and Colombia, South America. This project will develop a basin-wide management and conservation plan for the Orinoco River Basin that is shared by Colombia and Venezuela.  The Orinoco River basin is one of the most important basins in South America from the standpoint of biodiversity and from the standpoint of human use.  From an ichthyological perspective, the number of species, standing biomass and quantities of fisheries landing rank the Orinoco as second and third among all river systems in the world (second in biodiversity and third in fisheries with landings exceeding 75 million metric tons per year). Furthermore, many different populations of people rely on the freshwaters of the Orinoco basin for food, irrigation, fisheries, recreation, and spiritual-cultural legacy.  The overall value from fisheries, agriculture and ranching of the Orinoco social-ecological system exceeds a billion US dollars.  Despite the critical importance of the Orinoco River basin to peoples of Colombia, Venezuela and the world, there are no comprehensive management strategies in place that will promote sustainability of the natural resources.  Protection for non-commercial species (environmental others) and the willingness to protect non-commercial species is low to non-existent.   Furthermore, the level of risks and threats are increasing dramatically due to factors that include but are not limited to over-fishing, un-regulated gold mining, oil exploration, and deforestation. My project will seek to develop a sustainable use plan that includes humans as part of the plan and will value and protect as much biodiversity and critical parts of the ecosystem as possible.

The Caura River Basin. I will produce a book on the Caura River Basin in South America that include aspects of its geography, hydrology, regional and national importance. Also, fisheries and an annotated list of fish species with descriptive diagnosis and key characters of the most important ones that will include ecological notes, habitat usage, potential economic importance, spiritual meaning with images of them that illustrate the printout. Furthermore, mention of other important aquatic fauna and flora that form part of the ecosystem. The book will include also aspects on the historical and ecological biogeography and will conclude with an analysis of its conservation, potential threats and means to protect this important area.of those ecosystems such as: damming of head waters, pollution by agricultural, industrial and domestic activities, changes on normal climatic/hydraulic fluxes, mining (petroleum, gold, coltan bauxite), overfishing and introduction of exotic species. The knowledge of the megadiversity of the fish fauna of the Orinoquia has implications in its conservation, but also as part of the well social and economic being of the region due to its contribution to food security and economical benefits to the local/regional human populations.

Theater is inherently an anthropocentric form; since at its heart, it is the telling and retelling of the human story. These stories, through enactment and repetition, become part of our culture; a culture that shapes the mode in which we see, inhabit and understand the world, as well as our relation to it. Almost every culture in the world has its own form of story-telling. Theater is one of them. It has shaped the western world through the myths imbedded in tragedies, farces and comedies, as well as contemporary intercultural stories of migrations. Theater is inherently an interdisciplinary form, where text, embodiment and visual elements coexist in both space and time. Street theater, in particular, has been in dialogue with its environment since at least medieval times, utilizing the architectural sites of the city (parades that tie together state and church; moving from a cathedral to the arch of triumph), to more recently Eugenio Barba, who uses ‘invasions’ in the small villages of Peru (making community during the 70s), to flash mobs in New York City during the 99% insurrection (utilizing social-media groups).

Theater builds and questions our construction of culture and what we consider our culture and community to be. What if that community takes into consideration the ecosystem where it exists? And the stories and materials that we build with are embedded within theater and not outside of it?

While at the College of the Environment, I am working on specific performances and groups of street theater that utilize objects representing the human, The self and the automaton. This research project encompasses my work during multiple street theater festivals (Santiago, Chile: Aurillac, France; Montreal, Canada; Edinburgh, Scotland). In all of these venues, street-theater companies utilize objects to co-construct stories; namely, the central idea of the self and the automaton, focusing on street-performance scenographic object representations of the human, examining which characteristics are designed as the ‘ones’ that reflect humanity. My work looks at how the placing of the humanity (the self) into the object (the it), providing us with a better understanding of the ecosystem in which we live.

Some of the performances that I will be looking at for this particular research are: (1) The little giant, from Compagnie Off, 2014; (2) Dundun, Luz de Vida by Tobias Husemann and Stefan Charisius, 2017; and (3) Venus, by company L’homme Debout, directed by Benoît Mousserion, 2018.

This year, my research examines the effects of wildfire on forest structure and species composition in the Davis and Guadalupe mountain ranges of West Texas. The removal of frequent, low intensity surface fires from the forested landscapes of Southwestern United States has resulted in widespread fuel accumulation and increased wildfire risk. Over a century of fire exclusion through livestock grazing and direct fire suppression has altered the horizontal and vertical continuity of fuels and produced forest stand structures that are now susceptible to intense crown fires that differ significantly from the range of historical fire regime variability. The increased prevalence of high intensity crown fires in areas that historically experienced low intensity surface fires has triggered both public and private interest in minimizing the risk of future catastrophic wildfire. Four wildfires have burned through my permanent vegetation monitoring plot network in the last 7 years. Over the last year, I revisited 200 permanent monitoring plots that were initially established prior to these fire events to evaluate the relationships between wildfire severity and forest ecosystem structure and function. This research project is directly focused on informing applied and adaptive resources management and products from this research will: 1) evaluate the effects of wildfire severity on the horizontal and vertical distribution of vegetation and fuels at the landscape- and regional-scales, and 2) provide land managers at both sites with decision support for future fuel reduction treatment implementation activities such as thinning and/or prescribed fire by identifying key locations where the these wildfires have resulted in new dead and down fuel load inputs that are in need of active fuels management.

Agency in Atheist and Animist Worlds. The now century old anthropological concept of “animism” has recently experienced a resurgence, as a way of theorizing both indigenous and possibly more ecologically sustainable relationships to the environment. My project revisits the literature, both old and new, on animism to think about how agency is conceived in an animist (if there is such a thing) worldview as opposed to in a secular, post-Enlightenment worldview. I am interested in the question of who we think has the power to act in the world, and what the consequences are for thinking about the environment if human beings are not the only beings with agency. I will be approaching this both on a theoretical level and in relationship to my fieldwork with urban shamans in Buryatia, who are re-building shamanic practices as post-atheist subjects. They provide an interesting case study of how people raised as atheists come to perceive other-than-human actors as agents in the world and extend social relations to other-than-human actors.